Just about two weeks ago, I wrote that there would be an update sometime soon. So for those who didn’t know, I was on the writer’s strike. Okay, maybe more like writer’s block – severe writer’s block. I’m still here though, I haven’t gone anywhere. I’m still a Xanga faithful, I promise.

Because of this so called writer’s block I have been experiencing (I know, lame excuse), here’s a reflection written by our area’s ever-so-wonderful mother and couple coordinator, Tita Judy, whose beautiful words pretty much describe this past weekend: 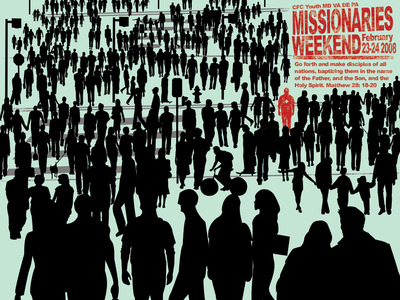 MISSIONARIES’ WEEKEND
Calling Upon the Hearts of Servants

After another busy weekend, I was savoring the quiet time on our drive home from our retreat. As the hum of the engine buzzed while on our way homeward, visions of the weekend’s events danced around in my head. While my mind fleeted in and out of that consciousness, I found myself staring out the car window to take in the scenery before me: trees, rolling hills, buildings, and the clear sky – things that brought to mind the different movement, experiences, thoughts and transformation which took place over the weekend.

It was a privilege to have been a part of the Missionaries’ Weekend Retreat. As usual, the time spent was well planned-out, and eagerly attended by a great team of Coordinators, and the CFC-Y participants. Through a series of talks, reflections, workshop, worship sessions, and fellowship, we were all reminded that we are all called to serve as missionaries; as families in the Holy Spirit, renewing the face of the Earth.

The retreat opened up with an ice-breaker dubbed “Memory,” or “The Memory Game.” The 28 participants took turns introducing themselves; by adding an adjective to the front of their name that started with the same first letter as their first name. As they eagerly went about the game, names such as “Jumping Jamie,” “Rambunctious Regine,” “Mysterious Marilyn”, and “Joyful Julian” were memorized with so much fun. Each person that followed had to run-down the list of names before offering their own. Amidst the giggles and laughter, it was a sure way for the group to remember names. The participants definitely displayed their word-prowess, and proved to us how great young minds work to retain memory.

The retreat itself was laden with so many “transforming” qualities; the worship songs that were chosen specifically offered messages about faith and transformation. The words and music melodiously tugged at the heartstrings of all the “missionaries” present, calling us to bear in mind the vision that keeps our focus on “running the race” continuously, and then “reaching the end” with God – as our prize.

Gino Delarama, our Full Time Pastoral Worker, led us through the weekend, used his unique and special ability to relate with the young participants. His well-thought-out delivery of the talks was heartfelt, and he often sent us into fits of laughter with some of his witty remarks. I have to admit that I was absolutely impressed, and in turn was quite inspired and transformed by the end of the retreat. I’m sure that everyone felt the same.

The retreat was, indeed, a long-time-coming; we had been thirsting for this sense of nourishment ever since. I can re-call Faye Estorninos’ talk, which she delivered with so much passion. She reminded us of the 5,480 wounds that were inflicted upon our Lord, Jesus Christ, during His Passion. Reflecting on this sent me to tears, and I recalled the many times I have offended the Lord by doubting or questioning Him when I was at my lowest.

To be sure things flowed in a timely manner the event was blessed with a very efficient service team. The effort put forth by the Parent Coordinators was top-notch. To add to the tone of the weekend, among the coordinators, we had anniversary celebrants (CFCY Cluster Heads B.Art and S.Winnie Doloroso) as well as first-time servers (CFCY coordinators, B.Peter Catama, B.Manny & S.Cecille Macalalad). It was also a good time to affirm our loyalty to our community as we joined effort with our CFCY Coordinators from Delaware (B. Don & S. Bec Coronel) and Pennsylvania (B. Ferdie Espino). As always we are grateful of the visit of our community leaders (Brothers: Romy Vargas, EJ Bernabe, Ismael Rico, Larry Ramos, Bert Bartolome and Sisters: Edna and Rose), not to mention all of the prayerful support we received from those who could not make it.

The Missionaries’ Weekend was a great reminder for us of how each of us is especially called to bear witness to His love. And this we did – through His message in the talks, through His blessings from our responses, and through His faith in us –to allow us to take action and live according to His will. Praise God for the many experiences from this special weekend, but most of all for the stories of love, the service, the camaraderie and friendship we all have through our one and only Lord, Jesus Christ.

4 thoughts on “My Desire”

This site uses Akismet to reduce spam. Learn how your comment data is processed.